305
The end of the Diocletian persecution

310
b. Apollinaris, the heretic who said that Jesus had a human body but not a human mind; He had the divine mind. Gregory of Nazianzus' reply: "What has not been assumed cannot be restored"

312
Constantine defeats Maxentius at the battle of Milvian Bridge and becomes Emperor of the West. Constantine had had a vision, and used the letters chi and rho (the first two letters in "Christ") as his symbol during the battle 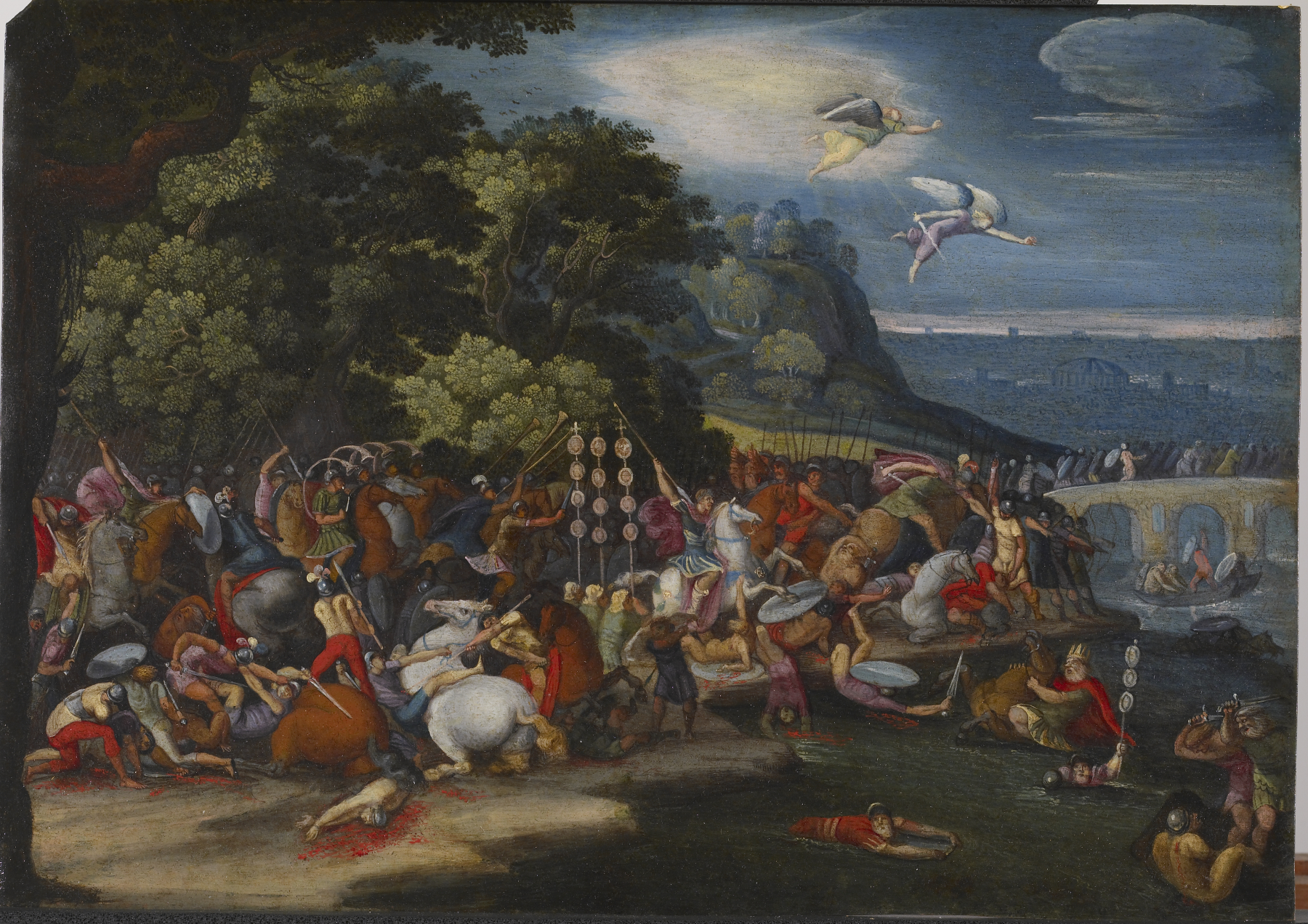 Late Renaissance Flemish painting based on an engraving based on a painting in the Vatican, whose subject is Constantine the Great at the Milvian Bridge.

312
Caecilian elected bishop of Carthage. He was lax toward the Traditores, who had saved themselves by handing over scriptures during the Diocletian persecution. And he seemed unenthusiastic about the martyrs. A group in Carthage rejected Caecilian's election on the grounds that he was ordained by a traditore. They elected a rival bishop named Majorinus

313
Edict of Milan gives Christians equal rights. It is issued by Constantine in the West and Licinius in the East, but Licinius soon withdraws his committment to it

314
By this date, there is a significant number of Christians in Britain

315
Majorinus dies, Donatus is his successor. This party becomes known as the Donatist party

316
The Donatists appeal to Constantine, but he rules against them. Then he outlaws them and banishes them in an effort to unite the church

324
Constantine defeats Licinius and becomes Emperor of both East and West. Constantine favored Christianity, which effects the face of the church even today

325
Council of Nicea condemns Arianism. Arius, in Alexandria, taught that Christ was the first created being, that there was a time when He was not. The council declared that Jesus was begotten, not made, and that He is Homoousios, of the same substance as the Father

328
Constantine revokes the sentence against Arius

329
b. Basil the Great of Cappadocia, the monk who created the basic Rule for the Eastern Orthodox monks that is still in use today. Basil taught communal monasticism that serves the poor, sick, and needy. One immediate effect of the disappearance of persecution is the rise of monasticism to replace the old martyr witness

335
b. Martin of Tours, a great monk who is famous for his compassion for the poor

339
b. Ambrose the Churchman, who fought Arianism and the revival of paganism, and promoted the power of the Church.

345
b. John Chrysostom, "Golden Mouthed." He was a bold and reforming preacher, who used the Historical-grammatical method of exegesis. This was unusual, because exegetes had been looking at the allegorical interpretation ever since Clement of Alexandria and Origen

347
b. Jerome, the great Bible scholar and translator, author of the Vulgate

361 - 363
Reign of Julian the Apostate, who converted from Christianity to paganism and restored paganism in Rome

361
Julian the Apostate removes the restrictions against the Donatists

379
d. Basil the Great of Cappadocia

379 - 395
The reign of Theodosius, who establishes Christianity as the official religion of the Roman Empire

381
Council of Constantinople. The Nicene position becomes dominant again, and the legal religion of the Empire. Jesus Christ is truly human, contrary to Apollinarianism, which held that Jesus had a human body but a divine mind. The Great

382
A council in Rome affirms the authority of the New Testament canon. It is important to remember that the content of the canon was not a conciliar decision. The church recognized, or discovered, the canon. The church did not determine the canon

c. 389
b. St. Patrick. He was a British Romanized Christian who established Christianity in Ireland

390
b. Leo the Great, an outstanding pope. He was influential in Chalcedon. He also argued for papal supremacy and showed political leadership in his negotiations with Attila the Hun

393
The Council of Hippo recognizes the canon. To be recognized as canonical, a book had to be Apostolic, fit in with the other scriptures, and have been of fruitful use throughout the church up to that time

400
d. Nestorius, the heretic who said that Mary was the bearer of Christ (christokos), but not the bearer of God (theotokos). He could not call a three month old Jesus God. So he said that Jesus Christ was two persons, whose only union was a moral one

410
The Fall of Rome to Alaric and the Visigoths

411 - 430
Augustine's Anti-Pelagian writings. Pelagius rejected the idea that we all fell in Adam (Federal Headship), original sin, and the sin nature. We could earn our salvation by works, so grace is not necessary.
Augustine insisted that we all sinned in Adam, and spiritual death, guilt, and our diseased nature is the result. God's grace is necessary not only to be able to choose to obey God's commands, but to be able to choose to turn to God initially for salvation.

413 - 426
Augustine writes The City of God. Some people blamed the fall of Rome on the Christians, saying it happened because Rome abandoned paganism. This is Augustine's responce, along with many diversions.

418
The Council of Carthage anathematized the teachings of Pelagius.

431
Council of Ephesus. Jesus Christ is one person, contrary to Nestorianism, which held that Christ was two persons, one divine and one human

448
Leo writes an epistle to Flavian, The Tome of Leo, to encourage him. It encapsulates the Christology of the church, drawing from Augustine and Tertullian

449
The Latrocinium (Robber's) Council. Dioscorus, Patriarch of Alexandria, presided. This Council declared Eutychianism, which held that Christ had only one nature, to be orthodox. According to this heresy, His humanity was not like ours. This would make redemption impossible. The council deposed Flavian, the orthodox Patriarch of Constantinople

451
Council of Chalcedon. Eutychianism is condemned, Dioscorus is deposed, The Tome of Leo is confirmed. Jesus Christ is "two natures, the Divine of the same substance as the Father (against Arianism), the human of the same substance as us (against Eutychianism), which are united unconfusedly, unchangeably, indivisibly, inseparably(against Nestorianism)." The church remains divided over these issues for the next 200 years

476
The last Emperor, Romulus Augustulus, is deposed by Odoacer, a German general

©1998-2022 Clay McKinney. The Church History Timeline was created and is owned and maintained by Clay McKinney. Any ideas that you have for improving the site are welcome. E-mail me at clay_mckinney@hotmail.com. Site design by BANG! Web Development.